This post is a part of an ongoing feature here at Nightmare Mode to provide you with an expert’s strategy guide on playing Dragon Age. This time, we’ll be going over the mage class.

In Dragon Age, you learn the value and awesome power the mage holds early in the game. Of course, let us not forget that Morrigan (voiced by Claudia Black of Farscape), is Dragon Age’s entertaining, mysterious, yet incredibly sexy mage. Venturing away from Ostagar, equipped with only the most basic of magic spells, you see that Morrigan is a force unto herself. She proves to be such a valuable asset, that no darkspawn-kicking party would be complete without her.

Wynne is the other mage, and her great power comes in healing spells–quietly hiding in the background and preventing your demise on the front lines. We aren’t sure how she does it exactly, but she keeps everyone alive and well so nobody asks any questions. All you have to do in return is make sure nobody with a blade gets anywhere near her.

There are other benefits to being a mage. One being you get access to the blood mage specialization, and if you don’t have it, you have the chance to unlock it. Another benefit being the sheer joy of unleashing powerful spells on enemies and annihilating them.

I made what is perhaps an unorthodox choice. With my mage playthrough, I chose to build a healing mage–leaving Wynne behind at the Circle Tower, and taking Morrigan with me. This means that my character took the place of Wynne. It’s a bit of a challenge playing the healer. It isn’t exactly something that is common in RPGs, since you usually play a character that deals damage. If you’re reading this to find out how to build an awesome mage, don’t worry. I’ve played the game enough times to know how to do it anyway…especially given that each time I play, including this time around as a healing mage, I take Morrigan with me.

As always, raise your cunning to at least 20 so you can manipulate conversations in your favour. Otherwise, guiding the development of the mage is the easiest of all. You don’t need strength. You don’t need dexterity, because staff hits never miss. You don’t need cunning beyond 20, there is no point. You don’t need constitution either, since you are banking on never getting hacked down. All you need to worry about, are willpower, and magic. 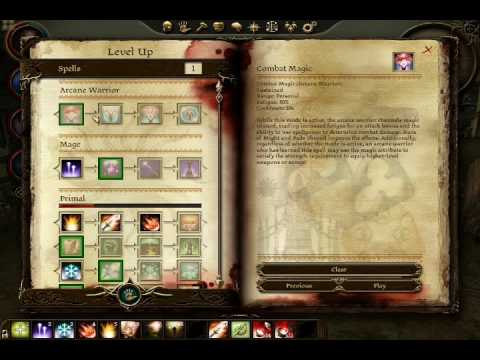 I would note that an 'upstanding' Grey Warden doesn't necessarily hew to any 'good' morality. For instance I could argue that perfect morality for a Grey Warden is to always intervene in any Maleficar hunt and invoke the Rite of Conscription on every Blood Mage the Templars find. So the problem with blood mage is that It only becomes useful late game, but you have to start building for it from level one basically,which brings with it another problem: If you do so, you'll be a shitty normal mage for the first 10-12 levels, because you gotta put a lot if points in to an attribute that is useless for a non-bloodmage: Constitution. Race - elf (+2magic +2 willpower is the best for mage) Stat - all in magic No Hitpoints - mage can be never attacked at all, and it's easier to drink mana potions than have a lot of mp - with 80+ magic the smallest ones on every difficulty will regen over 1/2 of mana).

Here's the build I tended to use: Blood Mage/Arcane Warrior (and also Battlemage if you continue to Awakening, Amgarrak, and Spirit Healer also if you make it to Witch Hunt) Skill points go to Coercion first (though you don't need to put any attri. For Dragon Age: Origins on the PC, Blood Magic Guide by atomicmew. 5.6 Entropy 5.7 Specializations 5.7.1 Spirit Healer 5.8 Power of Blood (Requires Warden's Keep DLC) 6.0 Builds, Tactics and Tactic Slots 6.1 Morrigan 6.2 Wynne 6.3 Tactic Slots 7.0 Additional Resources - 1.0 INTRODUCTION - Hi, my name is Travers and thank you.

A general rule of thumb I use for building Morrigan, is a 2:1 ratio of magic:willpower. This ensures she is very powerful by the end of the game, and also ensures that she won’t run out of mana for spells in your run of the mill battles. On occasion I’ll pump all 3 points into magic. Again, as a general rule, I also give the herbal skill set to Morrigan. One thing that is absolutely useless is the shapeshifter talent tree. Don’t waste your talent points on this, go for something a little more useful.

Read on to read the rest of the strategy guide!

The best spells for a power mage are cone of cold, crushing prison, stinging warm, and death hex. Cone of cold for a nightmare mode player is essential. I’m not sure you can play on nightmare mode without it. It is a strategic spell you can use to freeze an entire line of enemies. Even if you are playing as another class, micromanaging Morrigan to strategically freeze an enemy front is invaluable. You can combine cone of cold with a variety of spells, like crushing prison, to shatter enemies. Make sure to experiment with following cone of cold up with different spells and abilities, to see some unique effects. This is true of most spells: following them up with something else, can sometimes yield unique effects. For example, you can do improve drain by casting vulnerability hex, and then following it up drain to yield “improved drain.”

The fourth spells in each elemental tree (fire, ice, lightning) are in my opinion, completely useless. They cause friendly fire damage first of all, and second, they encompass the entire fighting area. When an enemy mage uses one of these attacks, it is possibly the most annoying spell anyone can cast. The lightning spell in particular, not only causes huge damage to your guys but also restricts movement. In most cases your healing mage can’t keep up and you run the risk of killing your entire party.

As a general rule of thumb for building Wynne, is 2:1 willpower:magic. For my own healing mage, It might be more like 1:1 as I’m a little better than the AI at looking after my mana levels. It is better to be safe than sorry as far as willpower goes, the last thing you want as a healer is to run out of juice to heal people with. Skill set is up to you, other than coercion anyhow.

Must-have spells for a healing mage are, not surprisingly, all of the spirit healer tree, and the first tree in the creation group from heal to mass rejuvenation. Group heal is a must-have talent, as is mind blast. I’ve also equipped my healing mage with cone of cold and crushing prison for some extra punch. The very first tree, the mage tree, is also worth filling out, as it gives you the arcane shield, and the last spell in the tree is a passive one that increases your spellpower. Don’t want to give that one up. Cleansing Aura in the spirit healer tree is also a must. Although it is a sustained spell, and uses up a lot of mana, not having to use injury kits is a huge bonus. Of course it doesn’t heal your own gaping wounds so you can save the kits for yourself. You don’t need to have it activated all the time either, just a short burst after battle if someone fell down, heal them of their wounds and de-activate it, you’re good to go.

Mages come in all colours of the rainbow. You can make yours a healer, a power mage like Morrigan, or even a bit of both. Maybe a wielder of all those weird ailment-type magics, which in any other RPG would be a waste of time, but hey, they actually work in Dragon Age. A blood mage, even. Keep in mind that if you intend on using blood mage spells, you’re going to have to increase your constitution in place of willpower.

Party member recommendations? Anything goes, as long as you have someone who can heal. Whether that’s you, or Wynne. You also need a power mage, which is either you, or Morrigan. You could, in theory, even have a 3-mage party. Be warned though, any battle with a large amount of enemies will prove problematic because of the absence of a front line. The mages tower in particular is difficult with a three-mage team. Your mages can’t take much. It’s good to have a big warrior with a lot of constitution and heavy armour to draw all the damage for you.

Anything else: you’re on your own.