The daily quests are split in 3 parts, each part taking you to a different location in the vale to counter the Mogu invasion. You will receive approximately 1,500 reputation every day, so it will take about 3 weeks to reach exalted reputation with the Golden Lotus. The first (southern) boat can be focused on for this quest, as it has a few marines, a lot of sailors and, most importantly, Snellig. Snellig is an easy pull. On the land (east) side of the boat there is a big breach in the hull. Right inside the breach, under water, is where Snellig spawns.

This quest was bugged for me the first time I tried it. Maybe someone else was doing it but there was already a ghost kneeling in front of the brazier. When I came back a second time the brazier was empty, I used the quest item and the ghost showed up and the quest went smoothly. The veil between life and death is no more. With a single act of destruction, Sylvanas Windrunner has ripped open the way to the afterlife. Azeroth's staunchest defenders have been dragged into all-consuming darkness. An ancient force of death threatens to break its bonds. Pick this quest up at the same time you get Battle of Hillsbrad. You'll complete it as you proceed through the series. (1) You will probably find Citizen Wilkes at the same time you are killing the two farmers in the first Battle of Hillsbrad quest. I believe he spawns in front of the house where Farmer Kalaba is, but he wanders the Hillsbrad area.

This fight IS soloable, if you’re patient. All of the tricky stuff happens in Phase One, which I will describe below. Hymdall and Hyrja will periodically jump into the arena during Phase Two, so you get to deal with their annoying shields all over again on Odyn!

Similar to Heroic, but even more tedious due to the increased HP of each mob.

Guarm has a LOT of damaging abilites, some worse than others. Guardian’s Breath deals a large chunk of damage and places a debuff on you that makes standing in any color of subsequent breaths other than whatever you stood in for the initial breath a Very Bad Idea. Flashing Fangs is his big melee attack; have a Shield Block ready to go for this. In fact, it’s best to keep physical mitigation up as much as possible, since you’ll be taking constant double melee damage due to Guarm’s Multi-Headed buff. Guarm will periodically leap back and run around the room with his Headlong Charge attack; just watch where he’s running and keep out of the way. Roaring Leap deals a pair of obnoxious knockbacks, so be sure not to waste any DPS cooldowns if this ability is forthcoming. FINALLY, Guarm has three “lick” abilities that can be randomly cast on you: Flame Lick, Frost Lick, and Shadow Lick. Flame Lick deals a decent amount of pulsing magic damage, but Frost Lick is generally the most deadly, as you’re susceptible to taking a LOT of damage while stunned: I found it best to keep moving to make avoiding the stunning frost swirls easier. 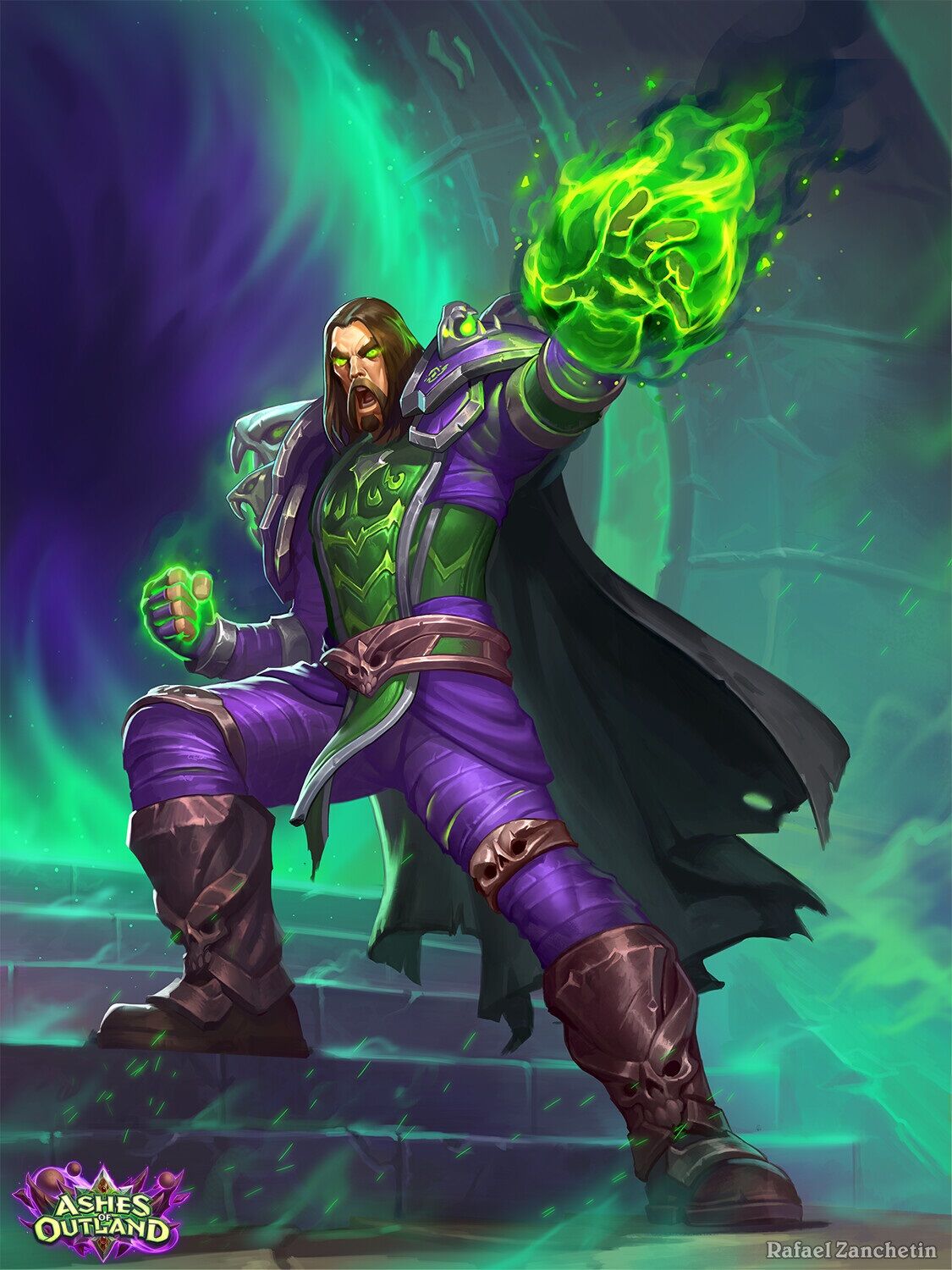 Same as Normal, but everything hurts more; there are no new abilities to deal with.
Guarm adds Volatile Foam to the mix, which do ticking elemental damage (and will kill you after a brief time once you get two different colors of it on you). There are two ways to deal with it: try to LoS the Foam casts by hiding behind the rock near the entrance to the boss area, or burn the boss down before you die a horrible death from Mixed Elements (ignore the value on the tooltip; it’s basically an insta-kill). I’ve seen a video of a Demon Hunter using the first strat, but I found it impossible due to boss positioning and the lack of a timer for the Foam casts. Luckily, if you can do about 32k DPS, you should be able to kill Guarm before you go kablooey.

An easy, if somewhat tedious fight. During Phase One, attack Helya while avoiding any green crap on the ground. In Phase Two, kill all of the Gripping Tentacles in the combat arena (there are nine of them total). For Phase Three, attack Helya until she’s dead. There will be adds summoned periodically, but they’re not terribly important. Helya will periodically cast Fury of the Maw during Phases Two and Three, which summons a large wave that will push you back and clear any patches of gunk off the ground. Each wave deals increasing damage, but it’s not likely to be a problem unless you’re taking a very long time to finish the fight.
The fight gets SIGNIFICANTLY harder on Heroic difficulty, making survival an all-encompassing concern. The Taint of the Sea DoT will start doing heavy damage, and there’s no way to avoid or drop it. To make matters worse, Bilewater Breath in Phase One will reduce your armor to zero, you’ll be getting hit with constant blasts of increasing damage from Torrent in Phase Two, and in the final phase Corrupted Breath will make most of your self-heals ineffective. Phase Two is definitely the most deadly of the three, so I’d use your Drums and DPS cooldowns here to push through as quickly as possible.

Shadowlands, the eighth World of Warcraft expansion, is now live, inviting us to journey beyond the veil and explore what Azeroth’s afterlife has to offer to its heroes. Priced at $39.99 for the base edition, this expansion offers an overhauled leveling experience, five new zones, a new Covenant system, and a great deal of fresh challenges and rewards. You can find the complete update notes over here.

Check out this quick launch trailer:

And here’s an overview of the expansion’s key features:

BRAVE THE BEYOND
The veil between life and death is no more.
With a single act of destruction, Sylvanas Windrunner has ripped open the way to the afterlife. Azeroth’s staunchest defenders have been dragged into all-consuming darkness. An ancient force of death threatens to break its bonds and unravel reality.
Hidden realms of wonder and horror await any who would pass to the other side. The Shadowlands is home to an entire realm of the departed; it is a world between worlds whose delicate balance preserves life and death itself.
As one of Azeroth’s greatest champions, you have been granted the power to cross over in body and soul. Now you must investigate a conspiracy to unmake the cosmos, and help Warcraft legends journey back... or fulfill their ultimate destiny.
THE SHADOWLANDS
What lies beyond the world you know? The Shadowlands, resting place for every mortal soul—virtuous or vile—that has ever lived. Journey through planes of torment and imprisonment to those of rebirth and eternal reward.
5 NEW ZONES
BASTION
Those who have lived a life of service are drawn to Bastion to assume the highest duty of all—carrying souls to the Shadowlands. Amongst Bastion’s gleaming spires and sweeping vistas await challenges to test the mettle of the steadfast kyrians.
ARDENWEALD
A vibrant afterlife for those closely connected to the wild, Ardenweald is a domain of endless restoration tended by the mystic night fae. Within this eternal forest, massive dream trees draw in precious anima—soul essence—to feed the spirits of nature awaiting rebirth.
MALDRAXXUS
Within war-torn Maldraxxus, might—of all kinds—makes right. Here, in the birthplace of necromantic magic, those who master the powers of death turn legions of ambitious souls into relentless undead armies.
REVENDRETH
A realm of looming keeps and gothic villages, Revendreth is home to the venthyr, the harvesters of sin. The wretched souls who arrive here may find penance for their misdeeds… or merely indulge the appetites of their keepers.
THE MAW
To be cast into the Maw is to be doomed to a bleak eternity. It is a tumultuous, hopeless land where the vilest souls in the cosmos are imprisoned forever. Should the ancient evil chained here break free, all of reality will be consumed.
NEW PLAYER HUB
ORIBOS, THE ETERNAL CITY
Oribos is the arrival point for all souls who enter the Shadowlands. At this crossroads, the dead are judged by the impassive Arbiter before being sent to their final destinations, and Oribos’ denizens swap gossip and anima—soulstuff that serves as both power and currency.
NEW FEATURE
COVENANTS
Align yourself with one of four Covenants—mysterious sects, each with their own ambition for the Shadowlands—to restore balance to the hereafter.
You’ll gain access to your Covenant’s Sanctum, where you’ll accept unique quests, undertake a sprawling covenant campaign, and call upon your allies to embark on important missions. You‘ll also earn unique abilities based on your Covenant and class, acquire a unique mount and visual appearance, and forge bonds with powerful souls, drawing on their essence to further customize your skills.
NEW FEATURE - INFINITE DUNGEON
TORGHAST, TOWER OF THE DAMNED
Once, the Jailer kept only the most dangerous souls in the cosmos confined in this eternal prison. Now, some of Azeroth’s greatest heroes are trapped here, and you’ll need to rescue them from the Jailer’s tower before he expends their very souls.
Torghast is an endlessly replayable, ever-changing dungeon that you can challenge alone or in a group. Your runs will differ each time, but you’ll need to explore cautiously. Death comes at a terrible cost. Defeat enough of Torghast’s unpredictable challenges, and you’ll be rewarded with unique abilities and items to ensure your present survival or bolster your next run. The further you progress, the greater your likelihood of retrieving materials to craft the legendary weapons and armor that will help you restore balance to the Shadowlands.
Other secrets lie within the tower… but they’re yet to be revealed.
GAME UPDATES
LEVELED-UP LEVELING
World of Warcraft: Shadowlands will smooth out the leveling experience and better prepare new adventurers for what’s to come. Players will level up to 50 before heading to the Shadowlands (new level cap: 60).
We’ve adjusted the experience curve to make it faster than ever to prepare for the newest challenges, and each level along the way will provide more meaningful increases in progress and power. All expansion zones are getting more flexible, too; they’ll be able* to scale to you and your friends while you level to 50, so it’s easy to try a zone you’ve never played.
*You can still outlevel dungeons and crush them for transmogs or fulfillment.
NEW CHARACTER CUSTOMIZATION
In World of Warcraft: Shadowlands, you will be able to become the hero you're meant to be. All-new customization options for characters will be available, from varied skin tones to facial features, new tattoos, hairstyles, earrings, and more. Just visit your friendly appearance agitator in Oribos, or the local barber shop back on Azeroth. It's time to give your main a makeover.