Over 2000 years ago there was an amazing discovery about triangles:

... then the biggest square has the exact same area as the other two squares put together!

It is called 'Pythagoras' Theorem' and can be written in one short equation:

The longest side of the triangle is called the 'hypotenuse', so the formal definition is:

In a right angled triangle:
the square of the hypotenuse is equal to
the sum of the squares of the other two sides.

Let's see if it really works using an example.

Why Is This Useful?

Write it down as an equation:

Then we use algebra to find any missing value, as in these examples:

Example: What is the diagonal distance across a square of size 1?

It works the other way around, too: when the three sides of a triangle make a2 + b2 = c2, then the triangle is right angled.

Example: Does this triangle have a Right Angle?

Yes, it does have a Right Angle!

So, NO, it does not have a Right Angle

Example: Does this triangle have a Right Angle? 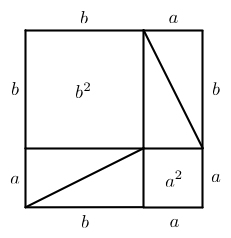 So this is a right-angled triangle

And You Can Prove The Theorem Yourself !

Get paper pen and scissors, then using the following animation as a guide:

Here is one of the oldest proofs that the square on the long side has the same area as the other squares.

Watch the animation, and pay attention when the triangles start sliding around.

You may want to watch the animation a few times to understand what is happening.

The purple triangle is the important one. 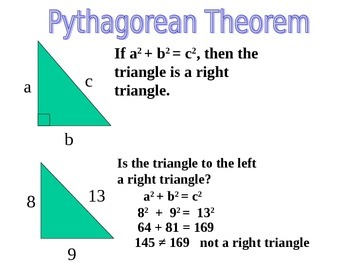 We also have a proof by adding up the areas.

Activity: Pythagoras' Theorem
Activity: A Walk in the Desert