UltraISO is an application for Microsoft Windows for creating, modifying and converting ISO image files used for optical disc authoring, currently being produced by EZB Systems.

Initially UltraISO was shareware however since 2006 it has turned 'Premium' and become chargeable. The 'Free Trial' version is limited to ISO images of 300 MB or less. 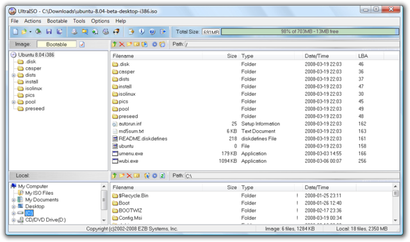 UltraISO is menu-driven, and the user interface of this application is well done and helpful. Putting itself at a distance from other, rival imaging programs is the support for double-layered DVDs with support for images of up to 10GB.

The developer of UltraISO claims that it supports almost every single known image formats, but since we don't have every known image, we can't verify that fact.

This download is licensed as shareware for the Windows operating system from disc utilities and can be used as a free trial until the trial period ends (after an unspecified number of days). The UltraISO Premium 9.7.2.3561 demo is available to all software users as a free download with potential restrictions and is not necessarily the full version of this software.

Compatibility with this software may vary, but will generally run fine under Microsoft Windows 10, Windows 8, Windows 8.1, Windows 7, Windows Vista and Windows XP on either a 32-bit or 64-bit setup. A separate x64 version of UltraISO may be available from EZB Systems, Inc.